The Canadian Privacy Law Blog: Developments in privacy law and writings of a Canadian privacy lawyer, containing information related to the Personal Information Protection and Electronic Documents Act (aka PIPEDA) and other Canadian and international laws.

About this page and the author

RSS FEED for this site

The views expressed herein are solely the author's and should not be attributed to his employer or clients. Any postings on legal issues are provided as a public service, and do not constitute solicitation or provision of legal advice. The author makes no claims, promises or guarantees about the accuracy, completeness, or adequacy of the information contained herein or linked to. Nothing herein should be used as a substitute for the advice of competent counsel.

This web site is presented for informational purposes only. These materials do not constitute legal advice and do not create a solicitor-client relationship between you and David T.S. Fraser. If you are seeking specific advice related to Canadian privacy law or PIPEDA, contact the author, David T.S. Fraser.

NYT: Some Sympathy for Paris Hilton 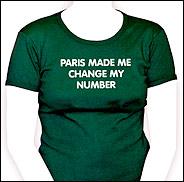 The most recent Sunday New York Times has an article on the past week in privacy. Both the Paris Hilton and ChoicePoint incidents are discussed. The Times also quotes Bruce Schneier, the author of Schneier on Security.

The New York Times > Week in Review > Some Sympathy for Paris Hilton:

"...But the implications of the problem at ChoicePoint are enormous, said Daniel J. Solove, an associate professor of law at George Washington University and author of 'The Digital Person: Technology And Privacy in The Information Age.' The company, he noted, has collected information on practically every adult American, and 'these are dossiers that J. Edgar Hoover would be envious of.' Government has looked into ways to mine commercial data to detect patterns of suspicious activity, he noted, and it will continue to do so. But who watches the watchers? Lawmakers like Senators Charles Schumer of New York and Dianne Feinstein of California are calling for tighter regulation of data brokers. That would be a good idea, said Marc Rotenberg, executive director of the Electronic Privacy Information Center in Washington. 'It's a big, largely unregulated industry that doesn't bear consequences when things go wrong.' Even those who pursue fame, he noted, deserve a measure of privacy...."